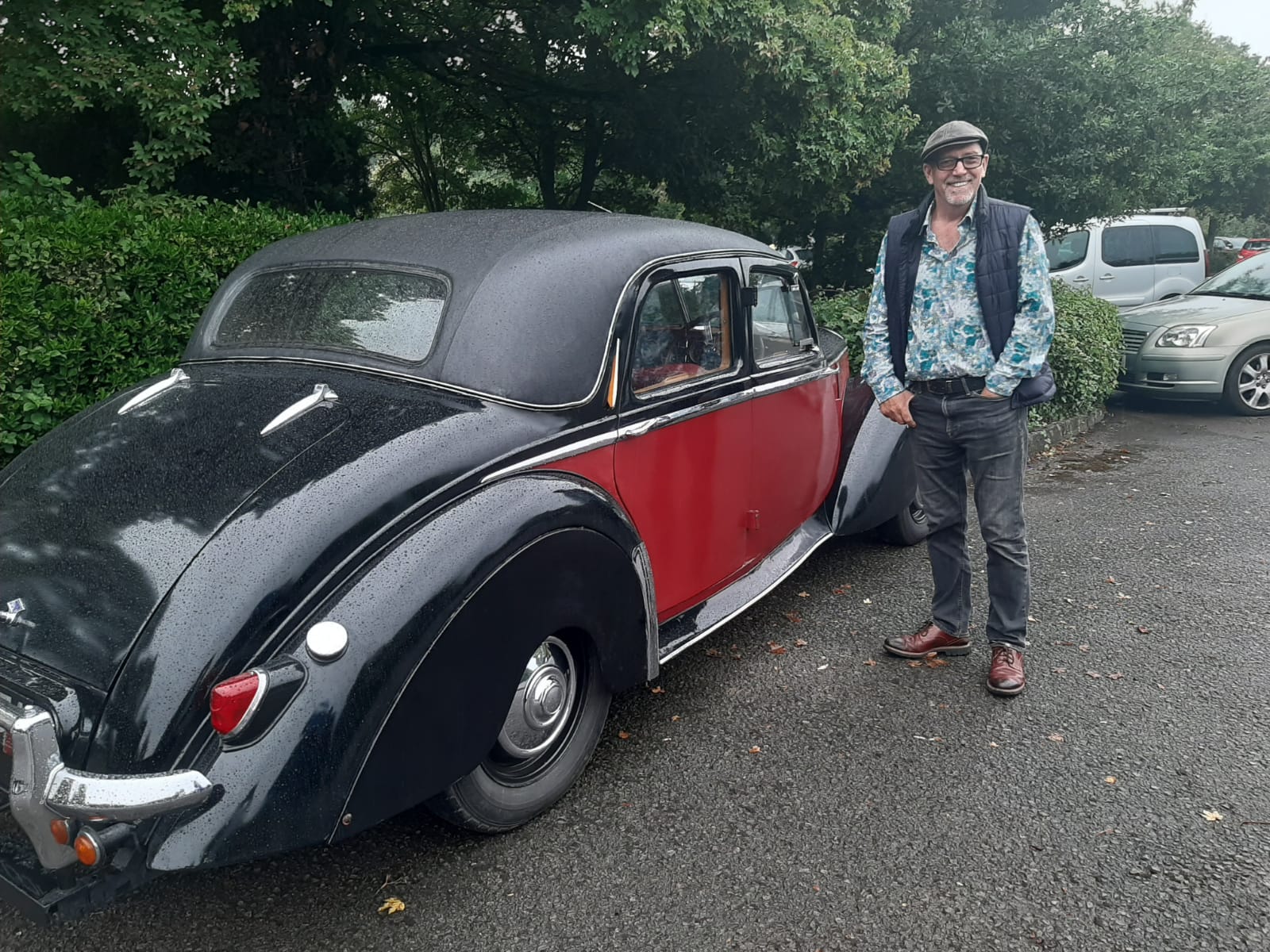 Yesterday we were to meet friends for lunch in Ross on Wye so I decided to take the Riley to learn a little more about the car. I intend booking it into Aldon Automotive, who have always looked after my ‘interesting’ cars for s check over, and thought a jaunt along some B roads would tell me more than the journey down the motorway two days ago.

Some would say I’ve done it backwards and should have taken it to Aldon before I bought the car, but the car was in Manchester and they are in Stourbridge and Covid stops me meeting too many people, so I did the deal and decided to trust to luck. If we worried about everything, we wouldn’t be able to do anything.

This is what I’ve learnt so far.

Jacqui was all dressed up to go out for lunch. She opened the garden gates and I pulled out of the drive and stopped so she could close the gates behind me and get in.  Closing the gates necessitated standing behind the exhaust and her legs got covered in black oil.  Oh dear. She was amazingly calm. The car doesn’t seem to smoke though.

While we having lunch it began to rain and we left Ross-on-Wye in the rain.  The wipers worked in a 1954 fashion but water dripped in from the top of the windscreen on the passenger’s side onto Jacqui’s legs.  We had a towel in the car and again she was very calm about it and it soon stopped raining.

After driving for about an hour I noticed it was becoming increasingly difficult engaging first and second gears, even going up the gears. There’s no synchromesh so I know you have to change gears slowly, but nevertheless I think something is amiss or needs adjustment. This morning with then engine cold it seems to engage just fine, though I have not taken it out, so have not done down shifts under load.

I quite like the smell of an engine, but sense there is a little too much of it coming into the cabin. The air filter smokes I notice so maybe that’s something we can look at.

After adjusting the driver’s seat so Jacqui could sit behind the wheel, it seems to be jammed and won’t shift. It will be something simple but needs fixing.

When I got home I felt each of the hub caps. Had no reason to, but just out of curiosity. The rear nearside was quite warm. Not hot, but warm after about an hour and a quarter’s driving. I assumed it was a sticking drum brake, but this morning the car rolls nicely so maybe it is a wheel bearing. Something for Aldon to look at.

I am not sure about this. I didn’t notice it much yesterday but coming down the motorway I thought I could hear a pinging noise from under the car. It could be something vibrating and rattling but it was noticeable on overrun. Maybe I heard it then because the engine noise was less or maybe it is detonation in the exhaust pipe? That’s a big question mark from me but I’ll mention it to Aldon.

You can hustle along B roads

The engine is very tractable and despite being only 1.5 litres it can go along country roads at a respectable speed. Out of courtesy I pulled over a few times to let people pass, only to catch up with them again down the road and find myself being held up by them.  It does struggle a bit on hills though, but the other road users seemed very tolerant to us.

The suspension seems very good. It rides speed bumps well and doesn’t wallow about and doesn’t make any worrying noises. All good here I think.

Lots of people have commented on Facebook and when they see it in the flesh that is is a beautiful car. Much nicer than my Civic Type R. some have said, which I find amusing. And whenever we fill up people come over and share their stories – My mother had one of these, it had an angel on the radiator cap and rolled down the garden over the rockery.  Haven’t thought about it for years.  Another guy said My father had one of these when I was a kid. Lovely motor car. That sort of thing. An old man yesterday staggered up to it on two walking sticks, peered inside and wandered off deep in thoughts he did not share.  But I am surprised at how little people know about cars. Is it a Rolls Royce? someone asked!