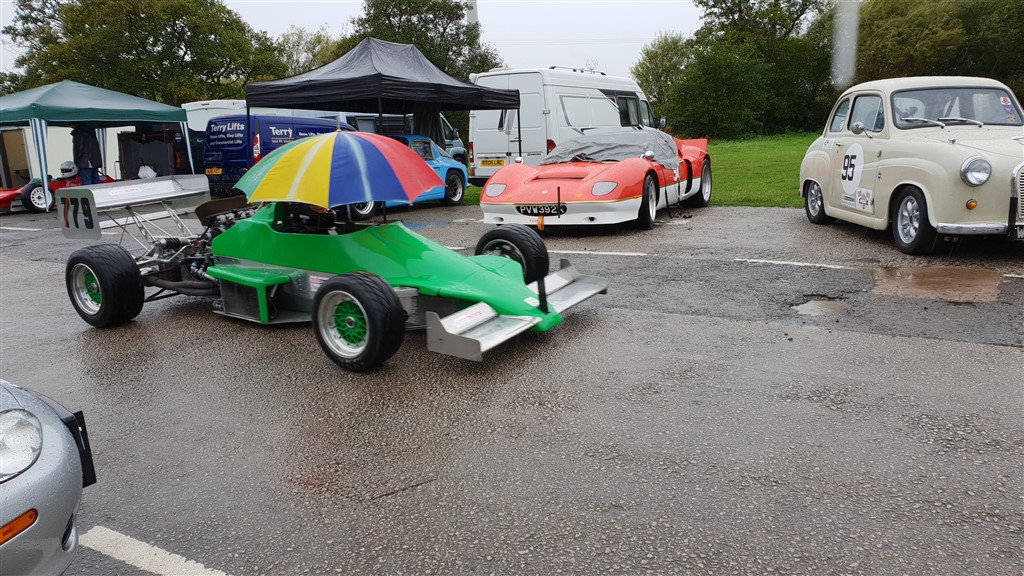 On Saturday I went to Curborough sprint course near Lichfield for round 32 of the HSA (Hillclimb and Sprint Association) Championship.  This was run on the figure of 8 course which I did a few weeks ago with the MAC (Midlands Automobile Club).

The weather was very weird. It was warm, overcast and very drizzly in the morning but at lunchtime it brightened up and a strong wind dried the track, so we had great conditions for the competition runs. This was in contrast to parts of Wales where they (my mother included) were enduring Storm Cullum and had power cuts and flooding.

My main competition this weekend was Liam Rollings in his 1300cc 100 bhp Austin Mini.

The lighting here looks like it’s dusk, but this is Graeme Williamson in his Imp at midday.

In my blog of 30 September I had a photo of a rare Lotus Elan +2.  Here’s another rarity.  I was parked next to this at MIRA, where photos are prohibited, but here it is at Curborough. It’s  Andrew Webber’s Europa 47/62.  We normally see Andrew in his black Elan +2 (in fact there is a photo in my blog from earlier in the year – LLandow Sprint.) but this is a one-off he has built. It’s a re-creation I believe of one of two  spaceframe 62s built in the late sixties with a 4.3 litre Rover V8. (Don’t quote me on any of that, that’s just my recollection from a conversation at MIRA). Anyway, it’s an awesomely beautiful and detailed car.

On first glance this looks like Fyrth Crosse is taking a very late apex at the second corner in his Ensign. However, there’s no configuration of this little track that has you going that way round and he is in fact spinning.

Ken Morris going the proper way around it.

And a different line from Laurence Marks (who used to own my Panda) in his Van Diemen. (Sorry about the blurry pics – all taken on my phone).

Another shot of Laurence having loaded the Van Diemen onto his trailer after crashing at Fradley hairpin when the throttle stuck open. No harm done though. Well, not much.

It was a day for umbrellas.

Ken had the biggest.

Les had the smallest.

Alan and Nick had the fastest.

And there were lots of others about.

Mine blew inside out and I resigned myself to being soaked through.

Again my main competitor was Liam and again he beat me, though it was looking close after the first competition runs. My best time was 45.28 on the single lapper. Not great but Fradley hairpin was super slippery and I couldn’t get a clean run out of it. Same for everyone I suppose.

This was the final round of the HSA championship and the final event of the year. I only did 6 HSA rounds this year (Your best 9 results count)  and eleven events in total, so will not be collecting any prizes.  Next year I may look to see what other disciplines the Panda might be suited for. Autosolos? Road rallies? Trials?

Anyway, this event marked the end of my ninth year doing hillclimbs and sprints.  My first ever sprint was this event (i.e. the last HSA round at  Curborough) in 2009 and of course I blogged about it – Curborough Oct 4th 2009.  This is a photo that appeared in that post.